In the 15th chapter of Romans, Paul is writing to the church, explaining how his being a minister to the Gentiles was entirely God’s grace, and that those who believed because of his preaching would be his offering back to God.

Paul then says in the next verse “…I glory in Christ Jesus in my service to God” (15:17, NIV). Other translations have that Paul has reason to be enthusiastic (NLT), or reason to be proud (RSV), or proud (The Message). The idea is that Paul writes that he has a reason to boast about what God has done though him among the Gentiles. 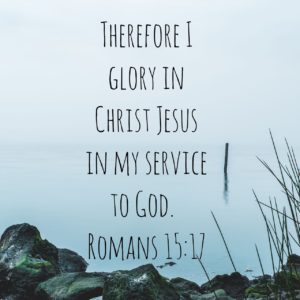 This may seem to be a square peg in a round hole. Doesn’t God reject the proud? Isn’t boasting wrong?

People boast in the things that will give them attention: wealth, strength, power, virility, talent.

If I could presume to put myself in his shoes, Paul’s view of himself and his service to God was likely formed by his life, the mistakes that he made (zealously persecuting Christ), the knowledge how sinful his flesh was, the power of God’s grace.

All of that taught him that his accomplishments and things that he could boast in were worth nothing. It wasn’t just an intellectual exercise, Paul learned the hard way that boasting in himself was futile.

When writing to the Philippians, Paul listed his pedigree only to immediately discard it as worthless:

Circumcised on the eighth day, of the people of Israel, of the tribe of Benjamin, a Hebrew of Hebrews, a Pharisee, persecuting the church, a faultless follower of the Law. Garbage.

He wants to be found in Christ, that’s all.

Paul knew his place. He hadn’t at the beginning. An encounter with Christ on the road to Damascus, a long time of solitude thereafter, embracing the idea that he had been totally and zealously mistaken, facing intense opposition from his fellow Jews, physical attacks, the thorn in his flesh…Paul learned the hard way that there was nothing he could boast about, except in what Christ had done and was doing through him.

I’m not there yet. I like to cultivate my brand as being a somewhat clever, adequately cultured, witty bloke, fun at parties involving Trivial Pursuit.

Paul had no concern for that. I doubt a Paul transported by an accidental time machine to our age would have a social media footprint or be interested in politics, wokeness, entertainment, TikTok or funny cat videos.

Paul may have come across as serious, always talking about Christ, and what Christ had done through him.

Paul wrote to the church in Rome that “It has always been my ambition to preach the gospel where Christ was not known, so that I would not be building on someone else’s foundation.” (15:20, NIV)

Again, it wasn’t to boast about himself, that he Paul had established a church on his own, but to turn that into an offering that was pleasing to God.

So what was the Roman church to Paul? If he hadn’t established it, why did he want to go there so earnestly? From Jerusalem all the way around to Illyricum, Paul had ‘fully proclaimed the gospel of Christ’. (15:19, NIV).

Paul had been a busy bee, he had done a ton of work in the region establishing churches, he had almost certainly heard of individual Christians in Rome and maybe it was time to do some encouraging.

One thought on “Boasting”