The human race has been at war for millennia and whenever nations and kingdoms have established a professional base of soldiers, they have developed a code.

One of the consistent ones is that soldiers on guard duty are in a pile of trouble if they leave their post without being relieved or fall asleep.

We see this at Jesus’ resurrection. An angel appears in frightening, ethereal splendour and ‘The guards were so afraid of him that they shook and became like dead men.’ (Matthew 28:4, NIV)

Some of the soldiers on guard duty then conspired with the Jewish elders to craft a narrative and admit to their commander that they fell asleep while on watch and let the body of Christ be stolen.

They would have been in serious trouble but received a promise from the elders that they would intervene and keep the soldiers out of as much trouble as possible.

Compensation. For their trouble and the going rate for a false report.

Watchfulness is a discipline. And discipline is a constant in a professional unit. Falling asleep on duty is labelled a dereliction of duty according to the Uniform Code of Military Justice (UCMJ). The guys in the US Marines are pretty gung-ho about the code that they serve by and following orders. Jack Nicholson and Tom Cruise starred in a little movie about that a while back.

I was thinking about this by contrast this past week. 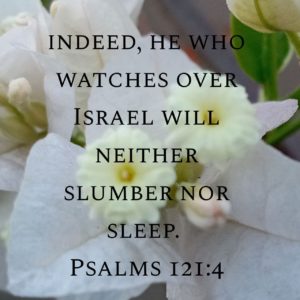 The keeper of Israel or the single soul.

He never falls asleep on duty.