Strangely enough, Thursday last week was the low point of my week at work. You might be forgiven for thinking that Monday is the most hectic, as by now you will have come across that song by ‘The Bangles’ dealing with the subject and recognised that there is a big difference between Sunday and Monday…

…so, back to the low point of my week, for some reason in this particular week, Thursday was the worst. I got to thinking whether work was a tenable endeavour without coffee. Aside from the familiarity of the coffee drinking ritual that punctuates our working hours, there is the caffeine that always works.

The question occurred to me: what makes the working world go around? Is it a Protestant work ethic? The impulse to be creative and productive? Greed? Coffee? Or a combination of all of these elements?

I suppose coffee is part of what makes people at work more resilient but of course it’s not the main factor. A report just this month in the press (www.independent.co.uk) suggested that for over 40’s, the optimum work week should be three days. I imagine that this takes coffee’s powers of inspiration into account. 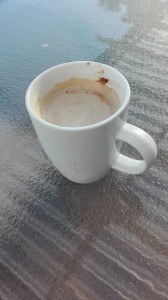 For the under 40’s I imagine it’s a combination of idealism, youth and ambition. Or in the case of Wall Street and bullish investment houses, cocaine, greed and the thrill of the deal, at least according to Jordan Belfort, the author of ‘The Wolf of Wall Street’.

In a city like New York, remove coffee from the equation and ‘the city that never sleeps’ may a lot more somnolent. Back in the 1600’s coffee was far too expensive for consumption by the common man and the beverage of choice for breakfast was in fact beer as it was cheap. Beer could be brewed locally whereas coffee could not, making it an import and therefore a luxury. Most cities in America preferred a cup of tea as they were established by the English, however New York was founded by the Dutch who love coffee, and as the city grew as a place where coffee was processed, the beverage also became cheaper and grew to become the beverage of choice for New Yorkers. The people of New York consume more coffee per capita than any other population in the country with the exception perhaps of the Navy or Coast Guard.

In South Africa, fine and gourmet coffees are slowly but surely catching on. For the longest time instant coffees were the drink of choice and Saffas were content with the arrangement. Now instant coffees are considered quite a bit less refined. Barista coffee goes hand in hand with shopping malls and beautiful indoor spaces. We’re becoming more sophisticated and South Africa is now a growing market. Starbucks has just opened their first branch in the country and now there’s no looking back.

Coffee is what keeps me going at work. That and music. For other people it’s the opportunity to nail a colleague, or making a deal (in Wall Street they call it hunting elephants), or hang out with colleagues. Too much politics, so I’ll simply stick with my good old cup of Joe and hang in there till Friday afternoon.

One thought on “The magic bean”