I realise its two years out of date, however at the 2016 Passion conference – a gathering for 18 – 25 year olds – Louie Giglio had a number of guest speakers, including the bookish John Piper, who wouldn’t look out of place in a musty school library.

Intended primarily as a resource for college age kids in the U.S. it seems to me that a Passion conference could be as useful to any Christian of any age or spiritual maturity. And so it came to pass that the wife and I purchased the DVD.

In two months, I have watched 7/8 of two messages, one by Christine Caine (an Australian of Greek heritage which is like all the charm of ‘My Big Fat Greek Wedding’ and all the quirkiness of ‘Crocodile Dundee’), and another by John Piper.

If I learn anything but watching these two, is that God can use people with voices that are not suited for a good radio show or a toastmaster’s shindig with an ‘A’ level of slick.

John Piper’s talent might not be the quiet baritone of George Clooney, but what he does have is an ability to provide perspective on a large canvas.

John Piper delivered his homily from Revelations 13, a strange chapter in a strange book. Is the world in 2018 any less strange and bewildering?

And right in the first verse, he sidesteps the inherent curiosity of the reader as to who or what the Beast is. Clue: it’s not the rampaging gentle giant Tenda Mtawarira from the Natal Sharks who elicits a BBeeeeeaaaasssst from the crowd whenever he carries the ball up. 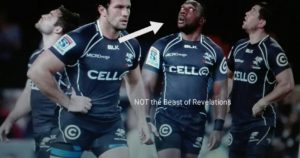 The dragon stood on the shore of the sea. And I saw a beast coming out of the sea. It had ten horns and seven heads, with ten crowns on its horns, and on each head a blasphemous name. (13:1, NIV)

As Piper notes, the identity of the beast in Revelations 13 is not the most important point. Being ready to repel evil and simultaneously ready to follow Christ will put the Christian in good stead.

It was given power to wage war against God’s holy people and to conquer them. And it was given authority over every tribe, people, language and nation. 8 All inhabitants of the earth will worship the beast—all whose names have not been written in the Lamb’s book of life, the Lamb who was slain from the creation of the world. (13: 7 – 8, NIV)

As in the days of John who wrote down this revelation, Christians are under attack today. In the time of the beast’s appearance on earth, the slaughter of Christian will simply be more pronounced, but history’s arc has consistently been about resistance to His plan. The important part, Piper notes, is those whose names are written in the Lamb’s book of life.

They are part of the story, the story around which history is actually based.

The slaying of the Lamb of God was the plan before the universe, history or even sin existed. And it is the subject of the Lamb who was slain that will be the content of heaven’s songs.

Easter and the Lamb that was slain is the subject of the songs of heaven.

This brings me to an aside: a while ago I read the book ‘Heaven is for real’ (Thomas Nelson publishers, 2016) detailing the near-death experience of young Colton Burpo, who while experiencing a vision of heaven, tried to get angels to sing Queen’s ‘we will rock you!’…they politely declined. It seems that secular songs are not germane for the worship environment in heaven.

Which does beg the question of whether any songs written on earth that glorify the King of heaven are sung in eternity. It’s not an urgent question that needs answering, just a thought.

In eternity, we will be singing about the Lamb who was slain, because His being slain for us – according to the Father’s will – is a pretty big deal.

How great is the love of the Father, that we should be called children of God.