In a long passageway of life, if each year were like a stride towards the end, I retain a broad picture of what each step was like.

Well mostly. Some years are featureless and I had to rely on a Wikipedia summary. But then some years were like stepping on a piece of Lego or a thorn.

I’ve been a news hound for many years and use world events to provide context.

I remember following the election of George W Bush in the news in 2000, and the controversy with Florida and hanging chads and the case that Gore filed that went to the Supreme Court. And no sooner than that had slipped into the past and September 11 opened my eyes. And opened Bush’s eyes too.

I remember the comedian John Ritter who I always liked passed away on the one year anniversary of 9/11.

Terrorism and Iraq dominated the news in the years following: the Iraq war in 2003, the Beslan hostage situation in 2004, the 7/7 bombings in London the following year and that case of the Helios flight over Greece where everyone blacked out from oxygen deprivation and crashed.

2007 was a good year. My foot was planted firmly. I got married and wasn’t too bothered by it, but heard all about the Sharks who were robbed in the 2007 Super Rugby final by a massive forward pass from the Bulls that went ignored in the dying moments.

I remember 2008 as the face off between McCain and Obama and Fannie Mae and Freddy Mac which was on everyone’s lips. The sub prime mortgage market crashed.

2009 was a bit of a mix. Everyone in my immediate family with the exception of myself ended up in hospital. But in the latter part of the year, our first child was born.

2010 saw the soccer world cup hosted by South Africa. Not much to write home about: a few new stadia were built and a bus rapid transit system.

2011 was an annus horribilis where we lost my sister. Death tastes bitter. My soundtrack was Matt Redman’s ‘Blessed be your name’. Multiple thorns underfoot.

2012 was an awful Christmas for the people of Sandy Hook in Connecticut with that school shooting. I never subscribed to the Mayan theory that the world was going to end in 2012 but it did end for so many innocents.

2013 was a good year. My foot was planted firmly. Our second child was born. After a long hiatus, the Sharks won the Currie Cup that year.

2014 and 2015 were not memorable except for the big stories in the news: Malaysian flight 370 that went missing and has to-date not been found, and the Charlie Hebdo massacre the following year.

2016 was all about Trump and Brexit. What an exciting time to be alive and see political changes like that take place.

2017 was unremarkable. In 2018 the Sharks again won the Currie Cup and Jacob Zuma finally resigned. Any hope for his successor held by some (not me) has largely faded.

2019 ended and 2020 began for us in the United States. It was very good, but it all very quickly went to mush.

Political leaders went mad that year. And the madness has yet to fully let up. From 15 days to slow the spread to you can’t get your rights back unless you prove such-and-such.

And 2021 was pretty rotten too. We lost my dad. The bitter taste of death again, as familiar and as welcome as bile. Broken glass underfoot.

Its an unsteady platform from which to launch into 2022.

But its also not a true way to look at things. In eternity, specific years will probably matter little, if anything at all. Events, meaningless from a political or news perspective.

God working in the lives of people, determining and seeing to their date of birth and date of death. The sins they amassed in a ledger, or the righteousness of Christ credited. A date and time when they were born again.

In looking back over the steps, I realise that its not a true metric. That there was one step that’s already been taken.

As the first man on the moon back before I was born, Armstrong spoke of one small step for man and one giant leap for mankind. The serial nature of years and contemporaneous events following one from another appeals to my need to sort through experiences in a linear fashion.

But these are the small steps. Put into perspective, there is one giant leap that has already been taken.

I’m marking time and progress and steps taken forwards or backwards, but Paul writes that Believers have already dispensed with death. Not the physical part of it of course, but pictured like a step, we are mid-stride between Earth and Heaven. 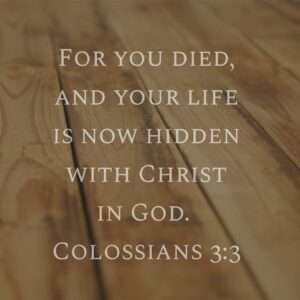 I like what Randy Alcorn writes about those who have become Believers, that ‘in a sense, we’re already in heaven with Christ’.