I like how Paul draws our attention in Romans 15 to the idea that putting our attention on the God of hope, means that the differences between us (as human beings) become trivial.

Paul writes that God remembered his promises to the Jews and also intended that the Gentiles would be in a position to praise.

God’s intent was always that both Jews and Gentiles would hope in Messiah, and that in believing there would be one body of Believers who sing praises. 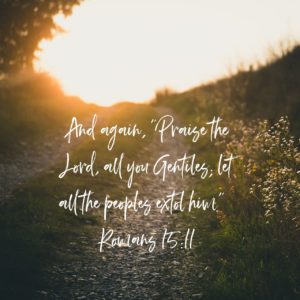 Where we find ourselves in 2021 is a malicious media movement trying to emphasise the differences between people because its good for ratings and click-bait, and back in Paul’s day he’s referring to the major difference is his time – Jews and Gentiles – and writing that we should look at God, and these differences are nothing.

Paul was exactly the right type of guy to make this point. A zealous Jew, who after having been saved still had a deep love for his people, and yet God – in what may have seemed an irony from Paul’s point of view – called Paul as an apostle to the Gentiles.

Paul stood at the crux of two worlds and pointed out that both needed Christ. In the light of salvation, in the light of needing Christ, all people are the same.

When we consume stories in the media highlighting the differences between the sexes, the races, positions on the political spectrum, its all trivial.

In Paul’s day, some Rabbis were in the habit of a morning prayer that was popular. “According to William Barclay, in that prayer the Jewish man would thank God that he was not born a Gentile, a slave, or a woman. Paul takes each of these categories and shows them to be equal in Jesus.”

In the light of Christ, Paul writes that the differences between Jew and Gentile, male and female, slave or free, are irrelevant.

I would also like to add the the differences hyped between races are also trivial.

Looking to the God of hope gives us the correct perspective.