Not everyone is mourning the passing of Billy Graham who died on Wednesday just past, 21/02/2018.

The vitriol and spitefulness of the most extreme demagogues on the political left was predictable in rearing its head, yet shocking in the depths of depravity and incivility it plumbed:

Now, Max Lucado is unfailingly polite and not as direct as I think human beings have a right to be when they have an opinion, so he stands in the starkest contrast to that lost soul Lauren Duca:

Only in the Kingdom, can a simple country boy and a preacher come to have such influence. I don’t necessarily agree with all the lives on Lucado’s list of great people, but I get what he’s saying. The world is poorer for Dr Graham’s passing.

I somehow think though that Billy would echo Paul’s sentiment, that it is better to be apart from the body and at home with the Lord…the body of Billy Graham was chugging uncomfortably up the final hill of life, and now he has been welcomed into the joy of his master.

I somehow think that Billy Graham would also echo the sentiment of Dr Carey (link below) who suggested that a friend speak less of Dr Carey and more of Dr Carey’s saviour.

On the passing of Billy Graham, he would point the way – and so should we – to Billy’s saviour, God’s one and only Son.

So, it’s not as much about Dr Graham as about Christ. I’ll wager Lauren Duca – disgusting as her sentiments are – is really angry and lashing out at Christ, rather than his servant Billy Graham.

I remember when my father’s mother passed away and we had her funeral. The pastor held a very respectful, modest service. But he also did his primary job, which was to use the opportunity of an audience (some who were not regularly churched), to make a gospel appeal. 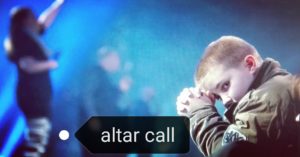