Lyrics from a Michael W. Smith song give meat and bones to an idea whose bare bones lie in front of me as I walk the hound:

Can’t help but wondering how

My heart evolved into

A rock beating inside of me” (Missing Person)

I like to think I’m a caring person. I cry to ‘Saving Private Ryan’ and ‘Passion of the Christ’. I love my family, but I realise while walking the dog that I care about a few people but have largely grown apathetic about others.

I’m not talking about people dying, because who doesn’t care about that? I can’t really categorise it by socio-economics or politics, but I realise that I don’t feel in touch with the human race in general.

Perhaps part of it is seeing less of people, feeling more isolated. Part of this horribly mangled lockdown that we are all mandated to participate in.

Like Michael W. Smith (saying Michael Smith while leaving out the W. is as awkward as saying Samuel Jackson without the L.) writes: how did it happen that he’s become uncaring like this?

My heart is literally like a rock beating inside of me.

I have to perform an internal diagnostic, right there while walking the dog. Is my heart isolated from God too?

I suddenly want to know by feeling. I know my connection to God, and can cite Scripture as proof. But I want to feel what I know.

I want to feel moved, feel connected to Him. After all, it’s the easiest thing in the world to morph into a Pharisee, being legalistic but basically like a tomb.

I think of that passage in Ezekiel where God promises to give Israel a heart of flesh in place of their heart of stone. 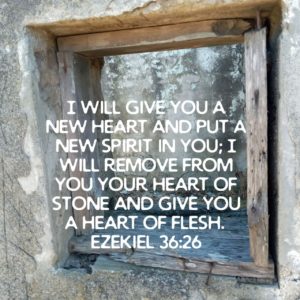 Basically, God is talking to his people, how they were expelled from the land and the land kind of misses the people and animals being on it. Almost like the land is lonely.

They needed to be changed: restored, cleansed, with a new heart (of flesh) and filled with the Holy Spirit.

I think of John Donne’s poem asking that God would ‘batter [his] heart’ because until then God had been so gentle with him and he realised God had to break him down to build him up properly.

I realise that the human heart is partly understandable, but largely mysterious, and even more obstinate when it comes to change. But that it cannot resist a holy and beneficial invasion from God who knows it, and even more incredibly the individuality of each one separately.

2 thoughts on “Having a heart”