In October 2008, the USS Theodore Roosevelt visited Cape Town along with the USS Monterey with the latter to enter deployment fighting piracy off the African coast.

The Monterey moored in Cape Town and accepted visitors who received tours, and I was rather chuffed to have seen a Ticonderoga class vessel up close. There is no upper limit of cool when you see SH-60 Sea Hawks, CIWS and behold the sight of a network of doors on the deck which at any moment can be opened and missiles of fury launched and directed by a high-tech weapons system that can play chess, write a report and tie your shoelaces at the same time.

I was impressed, surrounded by sailors and Marines providing force security. My nerd instinct was to salute, but I knew that a salute would not have been the proper response as I wasn’t enlisted or in uniform and was in fact a civilian.

I have still never been anything other than a civilian. And after 11 years I finally remembered to look up what the proper response is to a sailor or Marine (or any member of the armed forces in uniform): to put one’s hand over one’s heart.

Protocol is very important in the military. It denotes respect and the recognition of authority. The junior rank will initiate the salute and the senior rank will return it, with both locking eyes as they do so.

An image from the book of Genesis provides for me an illustration of the posture of those who are living apart from Him. After they sinned, Adam and Eve hid from God. They had to have known that they couldn’t really hide from him. They saw the world that He had created, the stars in the universe that He put in place, seen in the night sky. The biosphere, the robust yet intricate systems apparent to their powers of observation. They had to have known that hiding from Him who sees everything was futile.

Did they hide in a bush? In a tree? In a stream bed? I can make a guess about their hiding place, but I reckon I’m not far off when guessing their posture, looking to avoid eye contact, possibly with their backs turned to him. A tragic hide-and-seek with no mirth.

So many are like that today, seeking refuge in intellectualism, hedonism, religion. Eyes to the left or right, looking anywhere but in His. Understandably so, for to look in His eyes would be to confess shame, to acknowledge His authority.

It occurred to me that professional soldiers – in a throwback to archaic forms of respect – understand authority: possessing it, submitting to it and formulating a culture around it.

I thought immediately of the Centurion in the time of Jesus’ ministry who had a sick servant and sent a request for Jesus to heal his servant. Firstly, in that day and age, servants were commodities who were either useful or not. Why would a Gentile military man care for a servant who could be discarded? Secondly, I wondered how he came to adhere to the Spartan, martial culture of Rome, yet adopted a way of looking at the world that was culturally Jewish and in terms of faith very Biblical.

The article writer’s main point is that: “the Centurion recognized divine holiness in Jesus and sinfulness in himself and knew he was not worthy of Jesus’s presence.

He also recognized Jesus’s authority. While Jewish elders asked Jesus questions like, “By what authority are you doing these things, and who gave you this authority?” (Matthew 21:23), this foreigner knew exactly who Jesus was. ” 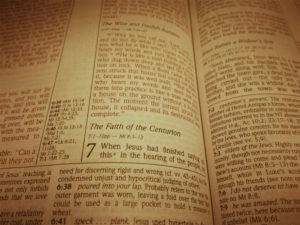 In fact Jesus remarks that he had not found anyone in Israel with such great faith. An outsider, adopting new ways who obtains a measure of faith greater than men who had been steeped in faith and morals since birth.

The Centurion sent a delegation to demonstrate his faith, firstly to ask for healing, then subsequently to demonstrate that Jesus didn’t even have to be near the servant to heal  him. The centurion knew that authority wasn’t line of sight or within the sound of Jesus’ voice, but a real power that Jesus had to utter the command and it would be done.

The centurion’s understanding of authority and the stuff of faith impressed Jesus and it sure impresses me.

Posture is everything, in facing your fellow soldiers with respect or even your enemy. But especially your superior.

I see people in this world looking away from Him, in either disinterest, or in distraction, or in rebellion.

For some, its a prostration en masse towards Mecca and away from Christ; after all, it is written in the mosque at Al Aqsa that God has no son.

For others, it’s an intellectual embarrassment for the idea of God which to them seem so fairytale-like and excessively sentimental.

For others still, its like the reaction of Adam and Eve, people who would rather not be confronted with their own bent towards selfishness and evil.

As for me, this Easter, its eyes front, looking to Him.  Looking back at a cross and an empty tomb.  Looking ahead to a triumphal return.