Getting sunstroke once is the best way to motivate a person to make sure that it never happens again, just like forgetting your wife’s birthday as the old joke goes.

It was a family trip to Ballito some time in the 1990s when more dramatic things were happening in Yugoslavia or the Gulf. A full day spent in the waves at the beach. One crispy critter and to this day, probably 30 years on, I can remember not being able to find a way of lying on the bed that didn’t result in pain.

A ceiling fan on full blast and an open window seemed to make little difference. I must have journaled back then because I have it on good personal authority that I read through Paul’s second letter to the Corinthians that weekend. Specifically chapter 4 where he writes about how Christians are like jars of clay, common earthen vessels, easily broken, but who hold the treasure of the gospel.

Something so significant and glorious in so ordinary a vessel. Paul writes in that chapter that ‘outwardly we are wasting away, yet inwardly we are being renewed day by day.’ (verse 16)

I learned my lesson, no more days in the sun like that. But you can’t avoid the burn. Its 2022 and I can’t find a way of lying down that doesn’t result in pain. A rough couple of years.

Paul wrote that we are wasting away outwardly but being renewed inwardly. And that ‘…our light and momentary troubles are achieving for us an eternal glory that far outweighs them all. So we fix our eyes not on what is seen, but on what is unseen, since what is seen is temporary, but what is unseen is eternal.’ (2 Corinthians 4:17,18 NIV) 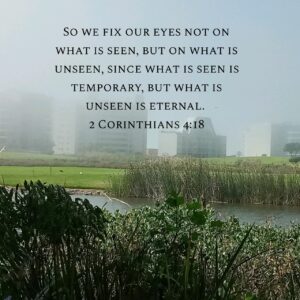 And I circle back to this chapter thanks to an author named Randy Alcorn who wrote a book about heaven. Not that I’ve read the book yet, but its on my bucket list. I watched his talk on Yubtub.

We are all familiar with pain, and we all instinctively avoid it, but we also know that it happens.

Randy says that he came across a book by the classic Christian writer, C.S. Lewis, where Lewis wrote the following:

“Paul captured the eternal remedy to evil and suffering in Romans 8:18: “I consider that the sufferings of this present time are not worth comparing with the glory that is to be revealed to us.” After citing Romans 8:18 in The Problem of Pain, Lewis says that “a book on suffering which says nothing of heaven, is leaving out almost the whole of one side of the account. Scripture and tradition habitually put the joys of heaven into the scale against the sufferings of earth, and no solution of the problem of pain which does not do so can be called a Christian one” (The Problem of Pain, 144).”

For the Christian, incredibly, as horrible as the pain is, it will balance and more than balance in the end when compared to heaven.

What Paul is saying, and what Lewis is echoing, is that I can itemise the years of pain and injustices, assign impossible personal weights to them to express the devastation, and put them on the scale. And they will utterly fail to measure against the ‘eternal weight of glory’ (heaven).