Cherokee chief Lone Wadi represented his people in a delegation to meet the Secretary of the Interior on the eve of the American Civil War in 1861.

They were congratulated for lookin’ so civilized, and encouraged to ‘endeavour to persevere’.

In real life, this didn’t actually happen. Its some brilliant script-writing for Clint Eastwood’s classic western ‘Outlaw Josey Wales‘. But something like this probably did happen.

Ultimately, the Cherokee decided to fall on the side of the Confederacy and declare war on the Union. An inevitable response to the patronising encouragement of the Secretary of the Interior, and the historical behaviour of the Union.

The Cherokee were no fans of the Union who engaged in a conquest of the West. Cabinet ministers often say the most unoriginal things to sound like they care, seemingly unconcerned that they are easily spotted as fakes.

The type of guys who assure others that better days must come (without a reason to offer that assurance), that a person can do anything if they put their minds to it.

Except, it wasn’t a carpetbagger tying to sell me something. This past week, three different passages from Scripture telling me that I have to have perseverance. 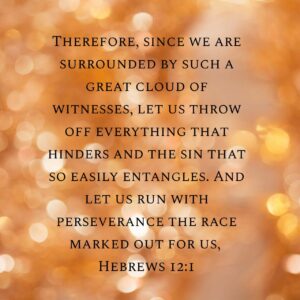 From the book of James (chapter 1):

“2 Consider it pure joy, my brothers and sisters,[a] whenever you face trials of many kinds, 3 because you know that the testing of your faith produces perseverance.”

From the book of Romans (chapter 5):

“3 Not only so, but we also glory in our sufferings, because we know that suffering produces perseverance; 4 perseverance, character; and character, hope.”

From the book of Hebrews (chapter 1):

“Therefore, since we are surrounded by such a great cloud of witnesses, let us throw off everything that hinders and the sin that so easily entangles. And let us run with perseverance the race marked out for us”

And yet, I (and we all) must persevere.

James writes of perseverance (or patience). “The ancient Greek word hupomone comes from hupo (under) and meno (to stay, abide, remain). At its root, it means to remain under. It has the picture of someone under a heavy load and choosing to stay there instead of trying to escape.”

Trials don’t inevitably lead to perseverance. Trusting God in the midst of it, this is what results in perseverance.

There is always a choice, to run away, or to run the race.

When God has been telling me this week that I need to endeavour to persevere, its not a line. There’s no hidden angles or agenda.

The writer to the Hebrews recounts the giants of faith throughout chapter 11, the great cloud of witnesses and it is in the light of their lives, the writer encourages us beginning in chapter 12 to throw off everything that hinders, and the sin that trips us up so easily, and run the race that is laid out before us.

In my mind’s eye, I don’t picture sleek athletes at the top of their game, I picture athletes with disabilities (like at the paralympics), or a school sports day where there aren’t professional athletes, just kids doing the best they can with a willingness and a little bit of heart.

Nobody is streaking down the obstacle course, setting records. Not in 2021. Not in 2022 either.

I like what Hebrews 12 explains as to how we can run with perseverance: fixing our eyes on Jesus. He persevered, and so can we (in Him).

There is always a choice, to run away, or to run the race.

I hardly think about heaven and what and who there is there. But that is a large part of the joy that Believers can look forward to, fuel to keep us on the track.