For those who loves movies (but who doesn’t?), these are familiar rhythms.

We can recognise and interpret movies because from watching movies, we have learned the way to watch them. Although each movie is different, the rhythm and actions are the same, like driving along a different stretch of road, but knowing how to get from a new A to a new B, working through the gears and navigating lane changes and intersections.

A movie takes us from somewhere to somewhere, a journey, a roadway of ideas.

Watching old favourites is like emotionally taking a well travelled route, the payoff sometimes even bigger than before because of the things we have experienced between viewings.

Things have a beginning, a middle and an end. A trifecta that is as certain as the four seasons.

I’ve seen so many things start, continue and then end – a movie, a relationship, a life, a hope. Its always the same.

I see it in the point of view of Jesus’ disciples…

Opening credits: The angel Gabriel delivering an announcement to Mary, John the Baptist preaching repentance in the desert…

Character introductions: Jesus calling the fisherman by the lake, making an appeal to Matthew Levi to follow him…

Plot twists: Jesus arrested and tried before the council, the crucifixion…

Closing credits: burial in a tomb…

And years later, some Believers in Corinth had got themselves into a logical jam. Sure, the tomb Jesus was placed in is now empty and he was resurrected, but basically when our bodies die, that’s it, no more bodies ever. Or so their thinking went. 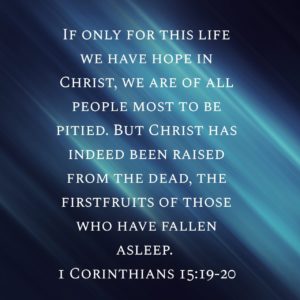 But Paul is like, nope. Either there is a resurrection from the dead or there isn’t (But there IS!).

I’m not with these Corinthians who held to a false idea about resurrection. I just don’t normally think about it as it pertains to me.

But it has implications for how we live here and now in between the opening and closing credits. It means the end as I see it is not the end.

It means that I impose limits that don’t exist for God.

It means that people will actually be raised from the dead. And not in the zombie sense.

It means that this power is already at work in us.

And it means not only living for the here and now.

As urgently as the bladder communicates to the brain that it holds more than 200ml of liquid that needs to be expelled at the first available opportunity, so is the message given to the brain that the body is thirsty and needs water.

The sensation of thirst is apparently regulated separately by two mechanisms in the body, and is too complex for me to easily summarise.

Both messages – to put something in, or get something out – have interrupted my sleep at different times.

The psalmist compares the imagery of thirst in a panting deer to motivation for a similar insatiability, a thirst for God.

I like that no matter where I find myself, or not even sure how to articulate where I’m at, the psalms and the psalmists have been there, and articulated it well.

The 42nd psalmist remembers a time when life was better and he pours out his soul: how he used to go to the house of God (the temple), how he used to feel God’s protection, and used to be amidst people shouting with joy and singing praise.

The psalmist pours out his soul, but then he speaks to his soul and tells it to once again put hope in God. 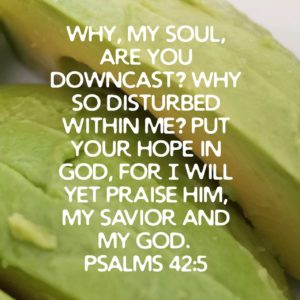 I don’t know about you, but if I were one of those people who kept a journal (I’m not by the way) I could easily summarise 2020 and 2021 as follows:

“Deep calls to deep
in the roar of your waterfalls;
all your waves and breakers
have swept over me.” (Psalm 42:7, NIV)

Perhaps the psalmist was thinking about water a lot, about drinking it when he was thirsty, about being pummelled by it at the base of a waterfall.

I’ve seen the drop at Victoria Falls in Zimbabwe with my own eyes. I’ve seen pictures of the base of Niagara. I can picture what this guy is writing about.

Now to what David Guzik calls the pleasant contradiction:

The psalmist is simultaneously calling on God as his Rock, his refuge, but also asking why it seems that God has forgotten him.

Like a bipolar faith in that moment, where God may seem distant but the psalmist calls on him anyway.

Like singing ‘Good, good father’ on the worst day of his life.

The psalmist asks the question of his soul: why are you downcast? He’s not obtuse, the nature of human existence means that all people will have a reason for their soul to be downcast. I don’t think he’s being sarcastic.

I think he’s asking his soul: why are you downcast when you have the option of calling on God and putting hope in Him?

Twice in this psalm, the writer juxtaposes downcast and disturbed with hope. He will yet praise God.

I will yet praise Him.