As quickly as my fingers fly over a keyboard or touchscreen, the dog’s nose sifts information.

The hound isn’t merely distinguishing scents in an abstract sense, her nose is like a PC mouse, and she stops where her fancy takes her, then clicks on the link and samples.

She is browsing, much like I would do online. From one web page to the next. One scent to the next.

The dog stops on a grassy verge, busy with her own thing, and I cannot perceive it. My nose is not half as magical as hers.

But I do perceive a stump where there once was a living tree. All human beings are thus, like a tree alive in the ground, and on a given day, cut down with a stump to memorialise what once was there.

One ring for every circuit of the earth around the sun, summer and winter, rain and dry. Like rings in the trunk of a tree, the years make their mark inside of us, in our core.

Having tilled the ground of Romans, I’m now sifting the sands of the book of Acts, reading of Philip, and young Timothy. And Peter and Paul, the apostles.

And I think about 2020 and 2021 and the rings on the tree, two years of perpetual winter where summer was practically forgotten and irrelevant.

How would I feel if I were Paul? On the road to Damascus, meeting Christ and being irrevocably changed. Blinded and confused. And the Lord gives his servant Ananias some insight into the man he is sent to:

15 But the Lord said to Ananias, “Go! This man is my chosen instrument to proclaim my name to the Gentiles and their kings and to the people of Israel. 16 I will show him how much he must suffer for my name.”

‘Show him how much he must suffer’ for the name of Christ.

All of us suffer what we perceive to be pain with no purpose. Its just the way it is.

We are not privy to how much we are to suffer and most of the time when we do it is not for the name of Christ.

Did the Lord show Paul everything? Did he show him how it was going to end? Could Paul have guessed it anyway? I mean, he was a maan who knew how the world worked, and he saw what happened to Stephen. Paul could have arrived at the logical conclusion on his own.

In my personal opinion, Paul likely knew that ultimately, martyrdom awaited him, yet he set out anyway.

Did it make the suffering easier to bear, knowing it was for a purpose?

Paul put in a lot of miles in the Med, preaching the gospel and suffering for the name of Christ, but he knew he had to go to Jerusalem, and he knew it wasn’t going to be kitten whispers and cotton candy.

As a matter of fact, on the way, Paul couldn’t zip through Ephesus without spending a little time there, and that would result in controversy with the local Jews who were opposed to him.

His party arrives by boat in Miletus and they send for the church elders from Ephesus, just to get together.

The Ephesian elders would have had to travel around 60 kilometers by foot to meet up with Paul, which Google maps calculates as a good 14 hour trip.

The way their meeting is described in the book of Acts is intimate. I mean, I think of Paul as a theological rock star, ultra serious and focused at all times. And on this windswept beach, my mind converts Paul’s goodbye into cinematic terms.

Paul saying that this is the last time he will see them. Disbelief, grief. Last words of exhortation. 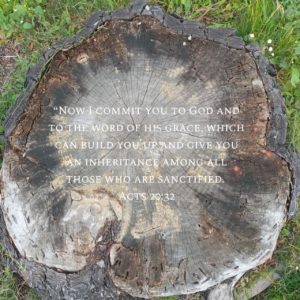 In the light of this scene, I think of all the farewells ruthlessly denied by our medical overlords, in the interest of public health. But I digress.

From there, it would be on to Jerusalem, Roman captivity and a date with martyrdom in Rome, all the while preaching ‘to the Gentiles and their kings’.

We’re not Paul, or Peter, or one of the apostles. And 2021 is another world that the apostles would probably not recognise.

Like my pastor has said more than once: there are two things that will last into eternity – the Word of God (Scripture), and people. Suffering is wrapped up in the human experience, and is explained and described by Scripture, but suffering can also bring people to Scripture.

Its all a knot that I’m unable to untie, lay out in its constituent parts and analyse.

So it is a knot that remains tied.