The sky was overcast, the ducks keeping to the pond where the photog was taking pictures of us, the newly married couple. The sun, stabbing intermittently through the clouds, combined with the light precipitation produced the phenomenon of a rainbow, which framed our pose as a fortuitous backdrop.

One covenant posing in front of another.

As we all do, I pay attention to the weather forecast, and the weather outside the window. But these days, I don’t notice the symmetry, or appreciate the beauty (most of the time). Rains are a pain. Winter is eternal. At least in 2021.

Walking the hound on a rare, warm noon, bracketed by windlessness and a clear blue sky, the clarity of the day prompts a clarity of thought.

A clear sky makes me think of the passage of Scripture I’ve been ruminating on. A clear sky evokes for me a clean heart. Azure blue, unsullied by clouds of doubt, responsibility, sin, and a zillion other things.

The greatest relief in the world is having a clean slate, an account that is settled, a mind that is meditating on Scripture. 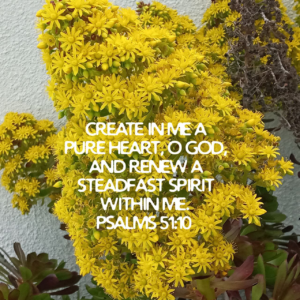 I haven’t ruminated on Scripture in days, or has it been weeks? The answer is cloudy, but the day is cloudless and my thoughts are on the 51st psalm, of David.

Create in me a pure heart, O God,
and renew a steadfast spirit within me.

Days without Scripture, weeks without serious prayer, sin threatens to be the default. Meditating on Scripture cleanses.

Psalm 51 is raw, one of my favourites. Where David writes from, I get it.

‘Create in me…’ – something only God can do. Create: ex-nihilo, out of nothing but His will, God can make a brand new heart in David, in me, in us. My old heart isn’t working, I need a new one. ‘Create’, like the same word recorded in Genesis 1 when God created the heavens and the earth.

‘Renew a steadfast spirit within me…’ – to keep the new heart clean.

For the first time in a while, clean, cleansed, new.

There are people who study other people. Professionally.

Specifically, the characteristics of generations over time. I know that I’m supposed to be a Gen-X-er for example.

The people born in the years 1883 to 1900 are known as the Lost generation, who reached maturity during and just after WW1, a high proportion of whose men were killed during those years.

The Greatest generation were those born from 1910 to 1924, and lived through tumultuous times and came out the other end, which is what makes them great I suppose: they lived through the Great Depression, and came of age fighting in WW2.

Following on from them was the Silent generation, those born between 1925 and 1945. They just got on with it, and had an ethos of working hard and keeping quiet.

Baby boomers are those born from 1944 to 1964. The silent generation got on with making babies, being quietly fruitful and multiplying.

And we come to Generation X, those born from 1965 to 1979, comfortable with media and the internet.

Generation Y, also known as Millennials came along between 1980 and 1994, slightly pampered and ambitious.

The young’uns are Generation Z (born between 1995 and 2015) and following on from them are what they’re calling Generation Alpha, those born between 2011 and the present.

Do I think the things I do because I’m a Gen-X-er? Not necessarily. Perhaps anyone of my generation thinks that older people are rockin’ and the young folk are just snotkoppe. One day, if I live sufficiently long, I’ll be a gray head and my kids may think I’m retro and cool.

I was looking at some old black & white photos recently. Romantically, I think it was a better time, with more manageable problems. 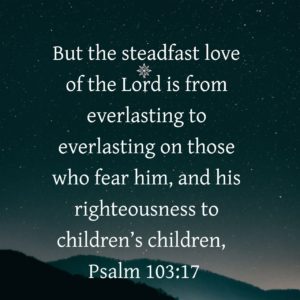 Black & white photos make you think about where you come from.

My Dad’s side of the family: the brothers Tamlin (Jimmy, Denis and Tommy). Jimmy married Sylvia Watridge and had three boys, the youngest of whom was my Dad. So much of this was before my time, or at least before I could remember accurately. I remember my gran (Sylvia) and her sister Agnes ‘Nessie’, who was a quirky but favourite aunt.

I remember when my Gran passed and I was there with my Mother and sister at the facility. I remember her memorial service and funeral. I remember I handed out tracts at the end of the memorial.

My Mom’s side of the family: the August/Legg clan. My Mother’s mother was Jane and I remember the day we got word about her passing. 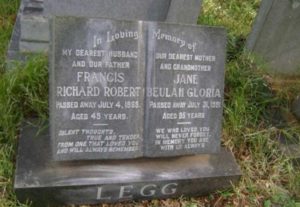 That generation gone now. “As for man, his days are like grass; he flourishes like a flower of the field; for the wind passes over it, and it is gone, and its place knows it no more.” (Psalm 103:15, 16 ESV)

Those generations made me who I am and informed my character by filtering down, but those generations from before then until now exist in the purpose and timing of God. “But the steadfast love of the Lord is from everlasting to everlasting on those who fear him,and his righteousness to children’s children, to those who keep his covenant and remember to do his commandments.” (Psalm 103:17, 18 ESV)

When I think about generations, I’m mindful that some sociologist or social scientist is going to examine my life as part of an aggregate and come to a broad conclusion.

Of more importance is that my life is characterised by verses 17 and 18 of the psalm: that I would fear Him, that his righteousness would be on my children.

After all, I cannot conceive of timelessness. I see only in linear time. God can see both via linear time and timelessness and rules over everything: “The Lord has established his throne in the heavens, and his kingdom rules over all.” (Psalm 103:19 ESV)