Not with God (to whom else would I go?). The body ages by degrees, the intellect is clouded by grief and weariness.

Doctors, lawyers, call centre agents, fear mongers, the man on the street. I don’t even want to engage with a mosquito.

I don’t want to be broken hearted. I don’t want to know what’s going on in the world. I refuse to engage with the inappropriately named ‘family meetings’.

Although, we’ll have to take the fork out of me as it seems I’m not done. Not quite yet.

Engagement is what God calls for, with Himself, with others (even though doing so feels like a constant bad Monday sometimes), with other Believers.

I’m reading through the book of Acts, and something is always happening. In Antioch where Believers were first called Christians, there were prophets and teachers worshiping and fasting and praying, and the Holy Spirit told them to set apart Barnabas and Saul for a work.

“So after they had fasted and prayed, they placed their hands on them and sent them off.” (Acts 13:3).

I’ve seen this happen recently at church, a family set apart by the Holy Spirit to go and engage with people far away.

For Saul (Paul) this is his first missionary journey, one of three. Barnabas and Saul go from Antioch to Salamis, Paphos, Pisidian Antioch, Iconium, Lystra and Derbe and back again through most of those same places to Antioch.

The small town of Lystra is where Paul and Barnabas get in a spot of bother. The nearest I can figure, Lystra doesn’t exist today, although the hill near the town is still there.

By the power of God, Paul healed a man and the reaction of the crowd and a pagan priest was to prepare to sacrifice bulls to Paul and Barnabas. Which caused Paul and Barnabas to tear their clothes in frustration. Nobody was happy. Not the apostles, not the crowd or the confused priest. Maybe the bulls lived another day, as Paul and Barnabas ‘had difficulty keeping the crowd from sacrificing to them.’ (14:18, NIV)

The situation did not improve.

“Then some Jews came from Antioch and Iconium and won the crowd over. They stoned Paul and dragged him outside the city, thinking he was dead.” (14:19, NIV)

Its not easy to fool people familiar with violence and death by playing possum. And yet like some terminator rerouting its power source, Paul got back in the fight.

“But after the disciples had gathered around him, he got up and went back into the city. The next day he and Barnabas left for Derbe.” (14:20, NIV)

For me, Paul is almost a scary figure.

I’ve had to attend several memorials or funerals for close family, and facing death every time knocks me on my backside, and with each new one it feels like it takes longer to get back up. I’ve endured years of a political climate where its fashionable and quite legal to condemn white males. I experience setbacks constantly.

And then I read about Paul (2 Corinthians 11), who itemises his sufferings: given 39 lashes five times, beaten with rods three times, stoned once (in Lystra), shipwrecked three times, spent a day and night on the open sea, in constant danger from bandits, Jews and Gentiles, lost countless sleep, gone without food, been cold and naked.

This is not just the randomness of tragedy, or the scheme of an enemy, like all of us experience. Paul faced all of this because of standing for Christ.

Paul is scary because he makes me feel like a poser. Like, there’s a fork in you? Tough! Pull it out and keep going.

So, after Lystra, and after they have finished their first missionary journey and had reached their most outward point, they returned to Lystra, Iconium and Pisidian Antioch where they had established brand new churches, “strengthening the disciples and encouraging them to remain true to the faith. “We must go through many hardships to enter the kingdom of God,” they said.” (14:22, NIV) 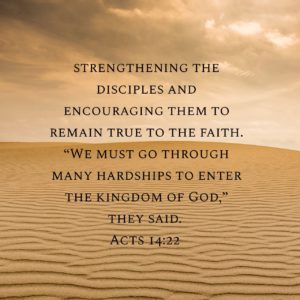 I can’t even. Paul’s attitude to suffering is like, come at me bro! This is not Hallmark, or Instagram with a slick bromide.

Sure, I’ve been knocked on my backside. I don’t want to really get up. I feel like I’m done, but apparently I’m not. God decides that.

I want to keep my eyes on what Paul talked about as beyond the suffering: the kingdom of God.

I got to see with my own eyes something I never thought I’d see: a grown man of 70 at the foot of the cross. 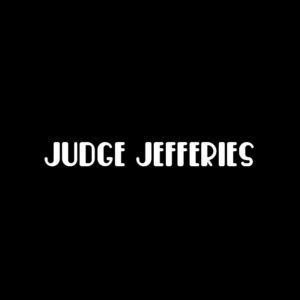 Pops was a navy man, his friends called him ‘Judge Jefferies’, a man familiar with the corporate environment, a man who found himself at ease practising the principles of Dale Carnegie’s ‘How to win friends and influence people’.

It was at Pops’ feet that I learned how to socialise, how to be a husband and a father, how to make sense of the world.

As I heard it told, he plucked me from a backwash going out to sea when I was a sprite. I remember getting into some trouble and hiding from his righteous wrath in a tree, which only prolonged the inevitable. Without remembering the specifics, I’m quite sure I was justifiably in trouble.

I remember safari suits, navy ‘tats, a Fiat with a faulty accelerator one morning on the way to school.

I remember I would pray for the salvation of my family. And I remember in that awful season of June 2011 when we mourned as a family for my sister. My Pops got the moment right, and went to the foot of the cross, and gave his heart to the Lord.

You could just tell, God was at work in the midst of our mourning.

He always had a liking for Psalm 103, which begins: Bless the Lord O my soul.

Bless the Lord O my soul. The Psalmist tells his soul to get in on the act, to praise God. Who feels like praising God at a memorial service? Or when life has pounded us like a pugilist? We have to because its right to praise God.

Because even this tragedy serves His purpose, and if God can do that, then he deserves our praise.

Because Pops is alive as he’s ever been, in the presence of the Lord, and surely I can take a good guess at what his soul is doing.