There’s a scene in the movie ‘Paul, Apostle of Christ’ where the physician Luke is sneaking his way around the city of Rome, trying to find his way to a hidden colony of Christians, when he comes across a scene that I’ve read described in history books, but saw dramatised for the first time…

…using human beings as torches along city streets at night.

A Christian is strapped to a ledge on a wall waiting for some soldiers to douse him with oil and set him alight.

In the dim scene, Luke and the Christian catch one another’s eye. Luke’s face says that he wants to intervene but it’s a no-win scenario and the Christian subtly indicates that Luke should stay hidden and safe.

They light him up.

This is history, and it really happened. And it’s unbelievable.

After the fires of Rome which Nero blamed on the Christians, they were targeted by the government. Luke connects with Priscilla and Aquila and then arranges to sneak INTO Mamertine prison to meet with Paul.

Priscilla and Aquila debate about whether to stay in Rome or leave. There’s no easy answer. Leave and isolated Christians may not find a safe haven, however temporary. Stay, and the whole community is at risk of death. They devise a plan to make overtures to some rich families with access to a tunnel that can take them safely out of the city. A young Roman boy in the group named Tarquin volunteers to take the message and later ends up dead. Cassius, another Roman in the Christian group sees no other way than violence and takes up the sword.

Meanwhile Luke sneaks into Paul’s cell with the help of the guard and writes down parts of what has become our Scripture. At one point, Luke says that he told the Priscilla and Aquila that love is the only way but admits to Paul that he doesn’t understand how love will be the answer against the cruelty of Rome.

Paul, inspired by the Holy Spirit, recites what love is. “Love is patient, love is kind, it does not dishonour others…” Paul asks if Luke has heard what he said, and when Luke says yes he heard, Paul is like, Well Dude! Write it down.

The prefect in charge of the prison – Mauritius – has a daughter who is sick and getting worse. Initially he doesn’t buy this whole Christian thing that Paul is telling him about (they talk from time to time) but just as his daughter is about to slip away, he rejects his pagan sacrifices and sends for Luke, a physician and a Christian.

Do not be overcome by evil, but overcome evil with good (Romans 12:21)

Love does no harm to its neighbour…love is the fulfilment of the Law (Romans 13:10)

In the end, Paul loses his head for the gospel. A grateful Mauritius cannot intervene, but Paul’s love has made an imprint on the Roman prefect of Mamertine prison deeper than the cut of a sword used in furious anger.

This lunatic regime of Rome is the authority that Paul writes of in Romans 13 when he says that Christians should be subject to. This is really hard core.

This is how radical Paul is. In this world we live in, Paul writes that we owe authorities taxes, revenue, respect and honour (Romans 13:7).

But those things are measurable and not infinite. Taxes and revenue have an upper limit. Respect and honour are expressed through gestures and utterances, like using the prefix ‘president’ or ‘minister’.

Once those things are taken care of, “Let no debt remain outstanding, except the continuing debt to love one another, for whoever loves others has fulfilled the law.” (Romans 13:8, NIV) 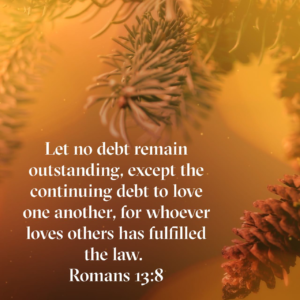 Love has no upper limit. We can never love our fellow brothers and sisters in Christ enough to say that our debt to that is square.

The movie ends with Priscilla and Aquila leading the group of Christians outside the city. They have escaped Rome, but they take with them a continuing debt of love to their fellow Christians.

Ronald Reagan – The Gipper – used to say that the 9 most terrifying words in the English language are: ‘we’re from the government and we’re here to help’.

The idea behind him saying this was that even in a first world country like the USA of the 1980’s, the State is more than capable – and more than likely – of getting in the way of helping any of its citizens. I’m sure its a sentiment as valid today as it was when he said it.

In the concluding verses of Romans 12, Paul writes that we are not to repay evil for evil.

As emotionally satisfying as it may be to indulge in vigilantism, whether real or imagined, we should trust that the Judge will ultimately make all things right.

As Christians, Paul writes, we are to overcome evil with good. Totally counter-intuitive. How are we to ‘win’ by having manners and not condescending ourselves to the level of our schoolyard bully? Playing fair in the age of cancel culture and mass media’s ability to ruin reputations for holding the incorrect opinion?

We submit ourselves to God and he will sort things out, including schoolyard bullies and the host of people who debase themselves by deliberately hurting others. I’ve read about it in the Scriptures but I’ve never seen God angry with my own eyes, all four of ‘em. That would be some thing to actually see.

A start of my reading of Romans 13 coincided with the court appearance in Senekal of the alleged killers of the 21 year old Free State farm manager, Brendin Horner. The particulars of what happened to him are something I’ve read about but don’t wish to re-read. My heart is broken enough. It’s an injustice and one of many in this country, and unfortunately I have no faith in the legal system.

We’re to trust God and not pay back evil, but then Paul writes that we are also to be subject to and respect the governing authorities. 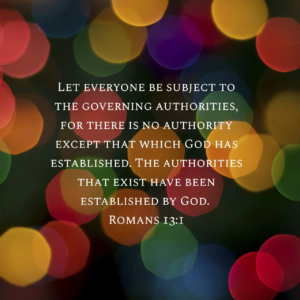 Romans 13 stands at odds with my natural inclination (look up Gadsden flag and the picture will be clear). Paul had to contend with the cruel maniac that was Rome and happily I have not tasted blood from a Roman fist. In many ways my experience with government has been far more benign than Paul’s.

However this passage make me uncomfortable. I like the way John Piper puts it into perspective however:

Without government, there would be anarchy, which would be worse.

So, we’re stuck with the government we have for the time being. They are His servants, or at least they are meant to be.

I have to walk a fine line between praying as I’m instructed and being genuine and sincere in what I’m praying for.

I don’t trust government’s motives for lockdown regulations, I don’t think government has any feeling one way or another about anyone’s personal freedoms, my common sense tells me that their self-interest and power come way before any consideration of the public good on any continuum.

And yet God has seen fit to let them exercise authority in this time and place.