In 1999’s ‘The Matrix’ from Warner Bros. (yes, the movie is that old) the idea of the mind waking up to truth is presented as a choice between a blue pill and a red pill.

As we know from the movie, Neo chooses the red pill and escapes the matrix. More recently, the idea has entered our lexicon and those who leave the Democrat party and extreme liberalism behind are said to have been red-pilled, invariably via the influence of a conservative on social media, be it YouTube, Twitter or some other platform. 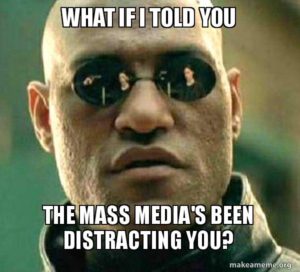 I thought of this as we were going to church this morning and drove past a Landrover Defender. It brought back memories and although white in this case, I was transported back to 1997 and the Ambassadors programme, a year-of-your-life intake training young people in ministry for missions in Africa.

We travelled in Southern Africa, as far north as Zambia, taking the gospel…you might say a red Landy red-pilling the unsaved and extending the kingdom.

The human mind is an awesome aspect of creation: imagine a creature able to partially comprehend an incomprehensible Creator and even interact with Him. We all know the story, the fall and a move from the mind being Adamic, to unregenerate and through faith to regenerate: technical theological terms describing the difference between an unbeliever unable to understand and accept Biblical truth and a Christian.

Being exposed to social media regularly and people who use it, I pondered the question of whether it is becoming more difficult in the age of mass media to convince people of the need to be saved.

From a short essay on line examining mass media, the writer made two observations:

In Paul’s day, pagans were exposed to ideas, read about them, discussed them and either adopted or discarded them. Knowledge (or the search for truth) was worked through with no hurry. Ideas were tested over the course of time, in the context of daily living.

Mass media provides too much information too fast for the average person to filter correctly. In the age of mass media, facts and opinions reached blizzard proportions: truth was hard to discern. In the age of social media, mass media is in the background and to the foreground is added emotions and activism.

Modern man has to traverse facts and opinions (of no eternal significance) as well as the added barriers of emotions and activism before truth is even presented for consideration.

Which means that in my humble opinion, the modern generation is the most disadvantaged when it comes to being balanced and spiritual.

The first and primary sin is the sin of not believing in Christ. This is the starting point for anyone who searches for salvation.

Mass media, especially mainstream tends to focus on worldly issues. The Christian is to focus on Christ and the world to come.

“Since, then, you have been raised with Christ, set your hearts on things above, where Christ is, seated at the right hand of God. 2 Set your minds on things above, not on earthly things. 3 For you died, and your life is now hidden with Christ in God. 4 When Christ, who is your[a] life, appears, then you also will appear with him in glory.” (1- 4, NIV).

In my opinion, mass media and social media is a barrier.

Knowledge takes time and is integrated, forming a logical field that intersects with every part of life; mass social media is imparted in electronic ‘bumper sticker’ sized portions, GIFs, short clips and memes that tell consumers what to think. The Gospel becomes the last thing on anybody’s minds.

It becomes a privilege to be used by the Spirit to do what we could never do on our own. And its a mystery how He accomplishes it. And as I remember from my experience in 1997 with the Ambassadors program, it’s pretty cool when you’re there to see it happen.

Dino Paul Crocetti was born 7 June 1917 and died 25 December 1995, his life intersecting with mine for around 21 years, much of it until now only distantly aware of this Italian kid who made a mark on the world of music along with Frank Sinatra, Sammy Davis Jr and other members of the ‘rat pack’.

Suddenly, 100 years after he was born in Steubenville, Ohio, I discovered this musical genius and marvel that people could speak breathlessly of the talents of Lady Gaga and RiRi. Many modern musicians and singers have talent but are completely missing the charm of Dean Martin.

I know a few things about Dean Martin: he had charm, he could really sing, he was an Italian-American, wonderfully and completely embracing both cultures, and he loved the ladies, eventually marrying three of them at different times.

He couldn’t speak English until the age of 5 when he first attended school and was mercilessly mocked for that fact. Personally, I think Italian is rightly called a romantic language and being an Italian-American, Dino rightly sang ‘That’s Amore’, ‘Mambo Italiano’, ‘On an evening in Roma’ and ‘Volare’. And in the middle of all this talk of paisano’s and goombah’s, his repertoire includes a song, ‘Under the bridges of Paris’.

Paris is usually thought of in terms of romance, intimacy, bistros and couples enjoying wine in the summer, boats on the Seine. Who knows how many men and women have romanced and been romanced under the bridges of Paris on the Seine?

What Paris is perhaps not generally known for are catacombs. There may be romance under the bridges of Paris, but there are tombs and tunnels under the streets of Paris. The tunnels were created by mining for stone with which to build and in turn, after cemeteries became full, bones were packed in crypts along subterranean passageways. The city of Rome also has a network of catacombs used for the same purpose.

I can see a picture in my mind’s eye from an Indiana Jones movie, of Jones raiding a catacomb beneath Venice to find a clue to the location of the Holy Grail.

It’s intriguing what lies beneath the streets of cities. There’s as much history below ground as there is above it, because catacombs don’t just house bones, but paintings and information related to those who lived and died hundreds of years ago.

A world below ground reminds me that there is more to anything than can be observed on the surface; this is true for social movements and people.

Catacombs, like regular cemeteries above ground provide an insight into a previous generation and their eccentricities, including jokes, humorous stories and even a recipe:

Humor is great, and singing talent is very pleasant, but the best legacy any of us can leave behind is to point the way to Him.