Imagine it: Whiteheart’s big hits album, Christian 90’s contribution to faith ballads belting out ‘Flame passes on’ through the stereo.

It takes me to a place that in some ways I’m glad I was never born into, yet I regret that I haven’t lived faith like the Christians persecuted by Rome:

Fire on the arena floor, swords drawn, lions, a bloodthirsty mob of pagan Romans baying for the flowing of Christian blood. Entertainment like you’ve never seen, better than HD.

And yet in the midst of this time when it seems like the Church is in danger of winking out, the flame passes on, and we see an ‘unbroken line of Believers building a human chain’.

It’s because of Christians like these that we are here today and the gates of Hades have not prevailed. People with extreme guts, where a comparison with sophisticated, philosophical, fatigued me would serve my brand poorly. My observation said with a Cockney accent, picked up from all the movies I’ve watched: “I aint all that and a packet of chips”.

Just as I was getting to appreciate Nabeel Qureshi’s stuff, his life and ministry, he passed away on Saturday, 16 September 2017. Not having to deal with rapacious lions and being a human torch for the satisfaction of Nero, Nabeel contended with stage IV stomach cancer, a longer lasting and perhaps more painful conclusion to his life. As a convert with a faith walk of but 15 years, his star shines brighter than mine.

I’ve been thinking about Nabeel a fair bit, and his place in that unbroken line of believers in a human chain. I know its unbroken because there are Christians today and I’m confident that there will yet be more Christians in the future. Touched by his life, and other ordinary Christians, including – by His grace – believers who go by the name of Sean, live in Cape Town and support the Sharks at every opportunity. I hazard a guess that I’m not the only one.

Humour aside, I remember my earliest encounters with Christians, at the Montclair Methodist Church, hanging out in the kitchen after the ‘altar call’, doing business with God. That congregation isn’t going anywhere, like a limpet on a rock, it is planted firm and I’m sure being that lamp on a stand. I remember the ‘Lord’s place’ in Brickhill Road in Durbs, and after the ‘altar call’ being led in prayer by a sweaty, ordinary guy whose name I can’t remember if I tried, and who mentioned that being a Christian is far from easy, but very worth it in the end.

I find it ironic and supremely appropriate that the name of the empire that opposed the church lent its name to the book of Romans, where we find the ‘Roman Road to Salvation’ a sort of A,B,C to show the unbeliever a basic picture of the gospel:

23 For everyone has sinned; we all fall short of God’s glorious standard. (chapter 3, NLT)

23 For the wages of sin is death, but the free gift of God is eternal life through Christ Jesus our Lord. (chapter 6, NLT)

It may seem like the world doesn’t want the good news in Scripture, but I can guarantee you that they will try everything else and still not be satisfied. The most unexpected people may have their names written in the Book of Life and I want to be ready to fit into that human chain, passing on the eternal flame.

This past weekend, I logged on to ‘Gab’, a social messaging site, taking it out for a spin in case the day comes when Twitter kicks all conservatives off its service because holding true to traditional Christianity has been labelled as ‘hate’.

I encountered a video log (Vlog #42) shared by Nabeel Qureshi and I was shocked to hear that he is essentially on his death bed as a result of aggressive stomach cancer.

Why it is so shocking is that Nabeel is only 34 and his ministry reaching out to Muslims is a strong one; he can reach them where ordinary Western Christians cannot. Logic compels me to suppose that sparing his life would benefit the church more, considering the work that he’s doing. However, the sovereign will of God seems to be leading in the other direction.

Nabeel asked for prayer and from me he received it, that God would spare his life. Our God is a God of miracles, however what He allows in terms of suffering and lives cut short is a mystery to me, and to Him is a sovereign prerogative.

I came to know of Nabeel through the ministry of David Wood, a Christian philosopher and apologist, and read Nabeel’s book ‘Seeking Allah, Finding Jesus’ where he chronicles his journey out of Ahmadiyah Islam to trusting in Christ. It wasn’t a decision taken on a lark, as both David Wood and Nabeel are serious scholars and very deliberate in using their knowledge and methodology to arrive at truth. It wasn’t an easy decision for Nabeel, as he was spurned by his family and I’m struck by his faithfulness.

In the hour of his death, he hasn’t turned back to Islam. Nabeel is human and wants to live and yet in his Vlog he acknowledges that God has a sovereign will and he will accept what God decides.

Our society exalts individuals who stand up for their ‘rights’ in the most selfish way, without bothering to examine the need for responsibility or the imperative to stay humble before God and think how you can rather serve others. For this reason, Kathy Griffin, Bruce Jenner (the name his parents gave him) and the likes of Antifa are labelled heroes.

Listening to a sermon recently on the persecuted church, I came to realise that I don’t give my persecuted brothers and sisters sufficient thought or sufficient prayer.

It also became apparent that the church gets a lot of heat and seems to get under the skin of those with power. Which means that persecution is only a matter of time or of degree.

What with Hurricane Harvey on the go right now in Texas and Louisiana, and what with the response of Believers, it’s obvious that adversity is like a cousin to persecution and in both cases, the church does what she does best. She thrives.

This sermon that I listened to concerned the word of Christ to the angel of the church in Smyrna:

“To the angel of the church in Smyrna write:

These are the words of him who is the First and the Last, who died and came to life again. 9 I know your afflictions and your poverty—yet you are rich! I know about the slander of those who say they are Jews and are not, but are a synagogue of Satan. 10 Do not be afraid of what you are about to suffer. I tell you, the devil will put some of you in prison to test you, and you will suffer persecution for ten days. Be faithful, even to the point of death, and I will give you life as your victor’s crown.

11 Whoever has ears, let them hear what the Spirit says to the churches. The one who is victorious will not be hurt at all by the second death.” (Revelation 2:8 – 11, NIV)

It’s a fascinating study but one of the quick take-aways is that Christ knows what is going on with His church. He knew all about their afflictions and poverty, the slander of their faith by religious bullies and their pending suffering.

This is real stuff, being faithful to the point of death. Not something that I could describe or conceptualise.

We can see this in one man, the bishop of Smyrna, Polycarp. Polycarp was born around 69AD and it is fairly certain based on the writings of the Christians of the time, bishop Irenaeus and Tertullian, that Polycarp had been a disciple of St John, who penned the book of Revelation.

The name Polycarp means ‘much fruit’ in Greek, and I think immediately of Jesus’ words in John 15: “This is to my Father’s glory, that you bear much fruit, showing yourselves to be my disciples.” (15:8, NIV).

Polycarp was tutored and disciple by John, an apostle who actually walked with Christ, and he must have been known for his fruit, and was a bishop in Smyrna. He was doing everything right and yet he found himself afoul of some angry pagans when he refused to burn incense to the Roman emperor. So, the year was around 156AD and Polycarp was approximately 86 years old and they decide that he has to burn at the stake.

Offered the chance to recant Christ, he refused. “Eighty and six years I have served Him, and He has done me no wrong…How then can I blaspheme my King and Savior?”.

Look at the picture below of Sean Connery, who at his peak physical fitness had a licence to kill baddies and thrill the ladies…does he look like a threat at 87 years old? I would suggest that his ‘00’ status is long since revoked. But Polycarp had to endure an unspeakable martyrdom, brittle bones, drooping flesh and all. 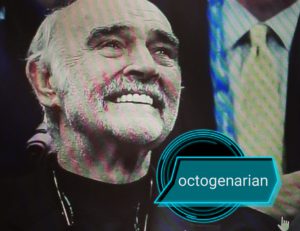 Apparently, the fire was set by amateurs and he wasn’t burning to death so they ran him through with a spear. If it had occurred to this particular mob that they should use a duller instrument because it would hurt more, it is not evident from the history records.

Ultimately, the emperor at the time (allowing for debate on historical differences) was said to be Marcus Aurelius, famously portrayed by Richard Harris in the feature film, ‘Gladiator’ (Universal pictures, 2000). Although I imagine the real Marcus Aurelius wasn’t quite so genial and wise as the character played by a mature Richard Harris with the benefit of a flattering script.

If I look at Polycarp’s fruit, and the church in Smyrna – which today is called Izmir in Muslim-majority Turkey – she carries on to this day. I was wondering and came across this bit of research which shows that even today the witness of the church endures:

I don’t think I’d be wrong in saying that I’m sure Polycarp has heard the words: “Well done, good and faithful servant.”